The first n scale layout at the South Florida Railway Museum was started in 2003 and measured 4 feet by 20 feet. It did not really represent Florida with only a couple of palm trees here and there. The layout was divided down the middle with a blue backdrop and a mountain range covered in trees and rocky terrain used as a break so you could not see the entire layout at once. You would move around the layout to view the different scenes. It consisted of three complete loops with a reverse loop on the inner main line that crossed over from one side of the layout to the other through a mountain tunnel. It could function as a DC layout but had the ability to be switched over to DCC with a simplistic addition of a transformer and a DCC tethered handheld controller. 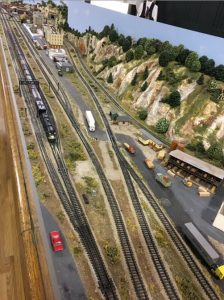 The layout had numerous turnouts that made up the different industrial spurs and the main rail yard. All the spurs and yards used power routing turnouts so engines could be parked, and power being cut to the rail yard or spurs which allowed other trains to run on the three mainline loops.

There was farmland with cows and several small towns on the layout. Industry included an icing station, cattle pens, lumber yard and numerous roadways. The radius was tight at each end of the layout making it difficult to run larger engines such as a 2-8-8-2’s, 2-8-8-4’s’, the Big Boy and passenger cars without them looking unrealistic with the outside rail fully exposed as they rounded a curve. More detailed work was done in 2005. Not much was added to it until a new layout started to be built across the north end of the building. The basic plan had been laid out on paper but construction on the actual build did not start until 2018 and continued through 2020.

In 2018 work began on north layout. A plan had been drawn up by club members and given to the n scalers to make it a reality. One of the biggest requests was to model Florida and to make sure the curved portions of the layout could handle large engines that required large radius curves along with locomotive facilities with the possibility of connecting the two layouts down the road. Since we will be running both diesel and steam locomotives, the engine facility is quite large enough to handle both kinds of motive power. This layout would be set up for DCC operation, however because we are using Digitrax, it is possible to run DC equipment but is not suggested. It tends to be rough on DC equipped locomotives. Below are several pictures of the start of the new layout. 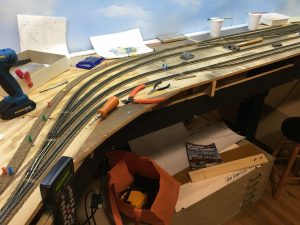 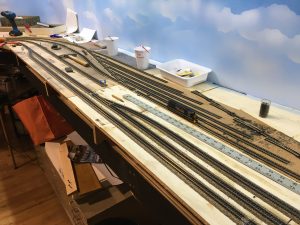 After the roadbed was laid and track work was completed, wiring was started to test the track and correct any issues uncovered. Notice the Rio Grande 40-2 testing the waters. After all was working well, buildings and some landscaping were added. The first being the Tropicana Plant and the orange groves. Looking at the layout you will notice warehouses are being put in place. 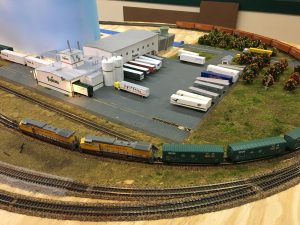 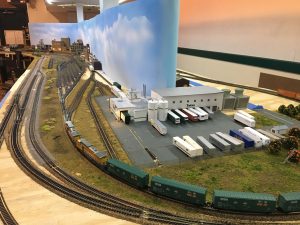 We were ready to start on some minor detail work. Roads were started and some light was placed in the buildings. There is a small yard between the Tropicana Plant and the warehouse area. We moved down to start work on the engine facility. Coaling tower, ash pit, water and oil islands were added along with a large turn table by Walters. There is a CSX headed to the shop with a 4-8-4 on the turntable waiting to take its place in the round house. When this picture was taken a single line mainline track can be seen passing by the shops. 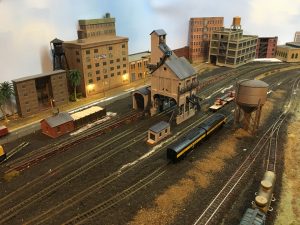 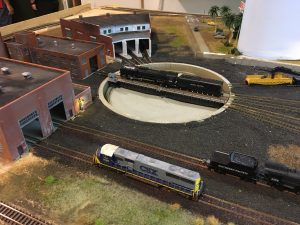