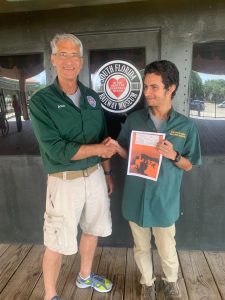 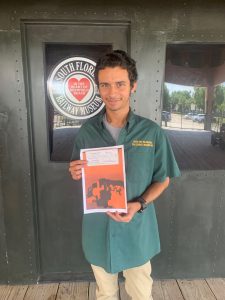 Congratulations to the 2022 Poster Contest Winners.

Thank you to all the participants and we are pleased with the response.  This was a great contest and we hope to make it annual.   Congratulations to our winners and we look forward to November’s exciting show. 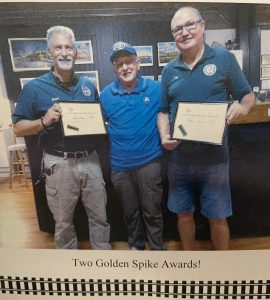 Mike Collins from the NMRA (National Model Railroad Association) presented Alan Chesler and Bill Logan with the Golden Spike Awards for their work on the H0 and N scale layouts respectively.

Open to all Members and Non-Members

All applications must be presented to the museum by 5 PM Monday, August 15th, 2022.

The winner announced on Saturday, August 20th, 2022.  The poster must be based around railroading, Engines, Cars, Stations, Track, Loading or unloading Facilities.  Any Era Submission needs to be original work.

Certification by the contestant will be required including a hold harmless for SFRM.  Judges will be the sitting BODs. If a BOD does not wish to participate in the contest, alternative judges will be selected by a blind draw from the membership roster until the 5 Judges are seated.  Drawings should be in color, a photo or drawing, or a combination.   Submission to be 8 and1/2 inches by 11 inches and include an SFRM application form. Basic info and certification as above. All ages, but under 18 will require an adult assumption of liability by completion of the application. Once submitted the art is the property of SFRM.

The selected First Place winning work will become the sole property of the SFRM and can be used in any visual materials without recourse. All other art will be available for pick up by the participants after Judging. If the winning art becomes unavailable the second and or third place art may be asked to assume. Once judging is complete, other than the winning art, ownership of the art returns to the submitter. SFRM and its members have no responsibility for the art other than $5 should it become damaged or lost once in SFRM possession.

In consideration of SFRM owning the winning art, there will be an award to the winner in the amount of $200. The winner will be paid by check. Second and Third place will also receive a cash award of $25 each. Artists competing will be asked to pose for various photos may be identified as the artist and in general and SFRM would appreciate their involvement.

Because we own the winning First Place Art, we can use it as fits our demands. The artist has no rights to the art and cannot use it in any way without explicit written permission from SFRM.

There are no other assumptions or exceptions to this agreement. Entering the contest confirms agreement.

Another year is under our respective belts and are we out of the Covid woods, one would hope, but we remain wary? I believe that we will be forever wary, this virus has become a reality to some and we have faced it with awareness and have thus far been successful. There are lingering examples and new examples of this disease around the world, this year has been different, but we followed a correct protocol and reduced the risk. Our success, not one of us has succumbed to the disease, a few caught it, but those that did came out on the other side.

We, in my opinion, have had many accomplishments this year, actually we had a record in one category, membership. Promotion of the museum is done by many of the members, some is word of mouth, but we did quite well with membership this year. A record of 12 new members have joined the ranks, the majority of them junior members, but we got a few seniors in there. A couple of past members rejoined and in total we have set another record, we are 40 plus in membership. A fourth of that total made up of juniors, remember, our younger members are the future! Plus, when a junior member signs up we get their parents as members also. The participation of the parents in the operations of the museum spreads the safety responsibilities to more eyes, their assistance ensures the safety of all the members and the museum assets. I appreciate their participation.

We re-opened amid a somewhat questionable timeframe of the virus, but it was well received and the public was happy to see our return. Much work went into putting on a fresh face and the participation of the membership was well, exemplary.

Another accomplishment was the success of our annual, actually what will be the annual swap meet. Alan Chesler had great expectations for the swap meet and those expectations were fulfilled. He pushed for ideas that had not been thought of and he promoted a positive attitude toward the success, with assistance from a few and the participation of many, he pulled it off. The efforts of everyone involved is proof of what our organization can do with future events, with forethought, management and perseverance we can do almost anything.

The continuous improvements to the museum proper and of the layouts is always an accomplishment. Much has been done to both layouts and the comments from the public support the work that has gone into getting them where they are.

The plans for displays, the organization of the displays, the changing of displays lies with a few, but one in particular is the driving force. Sandra Feldman can be found arranging, rearranging, changing, organizing, offering suggestions of improvement and implementation, her presence is felt.

There have been pluses and minuses, but this year one minus stood out. We as a group lost a stalwart supporter of the museum, one who knew no bounds for experimentation, regeneration and renovation. Hermann Roeseel was a character, a mentor, a story teller, and a cobbler in the true sense, give him a problem and he would cobble a solution. His passing has left a void in the everyday accounts of the museum.

What is on the agenda for the coming year? Hopefully an extension on the lease we hold with the state, that will be my emphasis, we still have about 20 months, but we are dealing with a bureaucracy. Additions to the displays, hang a three light signal head, begin refurbishing the newly attained speeder, spruce up the paint trim on the building, change the lighting, continue construction on the layouts, there are many things to get done.

There are six people I recognize who this past year have gone beyond the norm, whether it be for participation, foresight, or just plain effort, providing success of the organization.

Stuart Aaron for his selfless assistance to any and all who need electronic guidance and his coordination and management of the young and some old layout operators.

Bill Logan for his efforts in pursuing and planning of the reopening of the museum this past September and his perseverance in building a museum quality layout.

The Feldman’s, Sandra for taking on tasks that were beyond her purview, but not her knowledge and enthusiasm. Howard, for knowing when to step in and take charge and his ability to follow through with his

Mike Bonacci, who although he is one of our junior members has taken on a responsibility normally taken by a senior. He has been a most needed overseer of junior members by monitoring their movements and assisting in the operations of the layouts.

Alan Chesler for his vision, thought and management of what has been a milestone in the history of the museum for the success of the annual swap meet and among other tasks he has taken responsibility for.

Once again, as president of this organization I can be proud of all the effort that has been expended this past year and know that you all have a vested interest in the future of the museum. I hope all SFRM members and their families have a very free and less stressful new year ahead of you.

This year’s award was not requested by any of our SSR organizations, thus the award lay dormant. The recent swap meet sponsored by the museum owes some of its success due to the involvement of two Florida based modular groups, the ECHOES and the FECRS. Both organizations put extraordinary effort into putting on their best face. For this dedication and effort, the museum’s Board of Directors made the decision to divide this year’s Kempner Award between these two organizations. So, the Kempner Award for 2021 went to the East Coast HO Exhibitors Society and the Florida East Coast Railway Society, an award well deserved by both. The museum thanks both groups beyond the award for their involvement in our show.

Hermann Roessel was one of the original members of the organization, not a founding member, but original and he was original in many ways. He was stoic, opinionated, bull headed, argumentative, inventive, and open to helping whomever that needed it. He enjoyed conversing with others and passing on his knowledge of subjects that interweaved with model railroading. He was not a railfan, unless it was European, although he would be intent if you were relaying a non-European story, his focus was modeling. Scale had no boundary, he covered the gamut, all scales, all eras, he even got involved with live steam engines.

His approach to a problem was pondering, his knowledge and experience allowed him to be creative as he pondered. So, he pondered and then he pondered some more and usually his solution was to invent something, it could be logical, it could be illogical and off the wall, but for the better part his approach worked. His experience (a machinist by trade) in engineering, both mechanical and electrical provided him the knowledge necessary in building and repairing model trains. His work for the museum was tireless and even more tireless was his attentiveness for those who came through the door with childhood relics in need of repair. All were accepted without hesitation.

His desire to pass on that knowledge is reflected in the many ideas that he made a reality. He felt it necessary to teach the younger members the basics of model railroading and it has and does show in their activities around the museum.

He was born in Nuremberg, Germany, a “War Baby”, not a “Baby Boomer”, unfortunately for him, he was on the wrong end of the war in Europe. After the war he immigrated to America and then when he became of age, he became part of the army that years earlier his country was fighting.

The repair room, or office if you will, is named “Hermann’s Werkstadt” in honor of his ethos and heritage. It is where he spent the majority of his time helping others and it shall remain as such in his memory. Anyone who utilizes the area will have his influence overseeing their efforts. His presence within the museum will never be filled, as I said he was an original, the mold was broken. There is no replacing the man, nor the knowledge, nor the experience he shared, nor the spirit. He is missed by all who have met him and by those who will not have the opportunity to meet him.